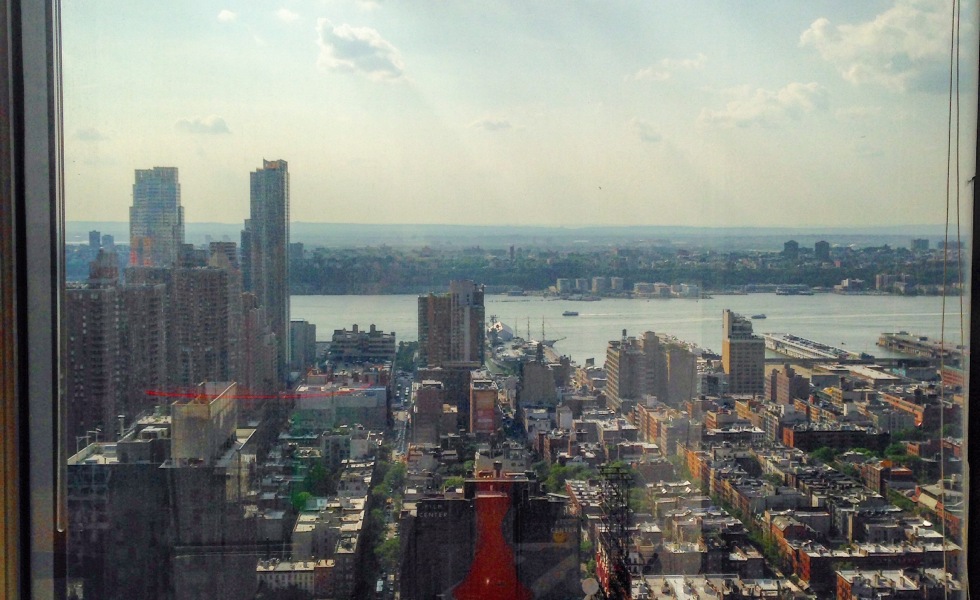 So I realized I actually enjoy blogging my every move and decided to write a little something on my first weeks in New York. Background Info: I have taken on two internships! One with Back Roads Entertainment, which does reality television. There I help with the development team. The second is with Viacom at the Live Events Department of Nickelodeon. They are the ones who handle all the live events such as Kids Choice Awards and the HALO Awards.

My older sister, Emmie, also lives in the same dorms as me. I am so lucky to have her in the city with me. She has been my biggest support system out here. Since we have both been busy with jobs, it is hard to even find time to enjoy NY together sometimes.

Sadly because of disclosure agreements I have signed I cannot give you much information on the what exactly I do at my jobs, but before we get to that let me say a few words on New York. One cool fact is that the Viacom building is in Times Square. The 7th floor has an outdoor eating place with awesome views of the city. I work on the 38th floor and the views are incredible that high up.

Also Viacom had this welcome meeting for the interns and Andy Grammar did a surprise performance and played us 3 songs including Honey I’m Good. This event had free guac, so you know how exciting it was for me!

New York is maybe the craziest experience I have had yet (this is coming from the girl who just traveled around Europe). Everyone thinks the subway or the jobs would have been the most difficult part, but to be honest, being directly in the action of the city is the hardest. (If you can figure out public transit in Croatia with no internet, you can figure out public transit that is in your native tongue with a smart phone)

For starters, I am staying in the cheapest freshman dorm in NYU for the 10 weeks. This was all fine and dandy until we realized there was no AC. New York can get extremely hot and humid in the summers. I found myself suddenly missing the cold nights of Ireland. Luckily my dad sells fans, so with the help of two oscillating fans over my bed, I am able to sleep.

Another point to make was the signs everywhere stating, “No alcohol unless everyone in room is 21.” (Yep, I am in a freshman dorm for sure)

Also I have no kitchen or microwave. Yeah just when you thought you had bad living conditions in Ireland, you suddenly miss having a frying pan and stove. Or at least 3 hour interval control of the heat and AC. I also have no room mates so I stare at empty bunk beds all night. If you know me well, then you know I have already covered the entire wall with pictures and posters to make it feel like home.

Now don’t think I am going on a depressing rant…the days get better and I am learning how to be alone. To turn things around, here are some cool things we have done in NY so far!

The Comedy Cellar is a stand up comedy joint located a couple blocks from my dorm. I had gone here for my 20th birthday and since have gone twice since being in New York. This place is amazing! Usually there are about 4-5 comedians who give a set. There is nothing better than a night full of laughter.

Chelsea Pier or The High Line, is an elevated walking path (about a mile long) over the city with views of the water, Jersey Cit,y and the Manhattan city scape. The walk way is from an abandoned train line and parts of it are still visible. Trees grow out of it and flowers and benches are everywhere. Perfect escape for anyone getting tired of city life.

Since I have arrived in NY, I have been convincing myself that I was not alone. I tried to constantly talk to people on the phone, text while on the subway and let myself be distracted when walking alone. Today I got off work a bit early and found myself extremely hungry. I popped out of the subway and into a dinner across the street.

It really hit home when the waiter asked “how many?” I had to answer “just me.” “Okay, table for one over here,” the waiter exclaimed. Nervously I sat at the tiny booth. (Those one person booths are really small…like my purse barely fit on the bench with me and I don’t have a butt…so pretty small).

I squished in and sipped my water. I ordered my usual: eggs, toast and bacon. I asked my usual question: Could you make the bacon crunchy? (I know its strange, but I really like burnt bacon, like extremely crispy) Once the waiter left, I didn’t know what to do. I looked around. Did people know I was eating by myself? No one seemed to care. There were actually a ton of people eating alone. I guess I never noticed before.

I considered pulling out my phone. I didn’t. Instead I watched the rain start to fall out the window to the corner. I watched the cooks pull food to the waiters. I watched the people next to me attempt conversation, but later getting sucked into their own phones.

Before I knew it, my food was ready. (Also it came with hash browns…what a win) I took a bite of the bacon first. It was perfectly burnt. I did finally check my phone, which had buzzed a couple times. It had been 40 minutes. I ate in silence, but I really enjoyed the food. I noticed the rain picking up and decided it was maybe best to bolt to my dorm now.

I think that there is something really powerful in being alone. Yes, it really sucks. All you want is someone to talk to before bed or someone to eat dinner with. What I learned today, was that being alone is okay and everyone is capable of it. Not to mention the awesome people watching you can do on park benches alone.

Until next time, here is a reminder about appropriate subway behavior…

← My Bonnie flew over the ocean
Life As A Professional Intern →