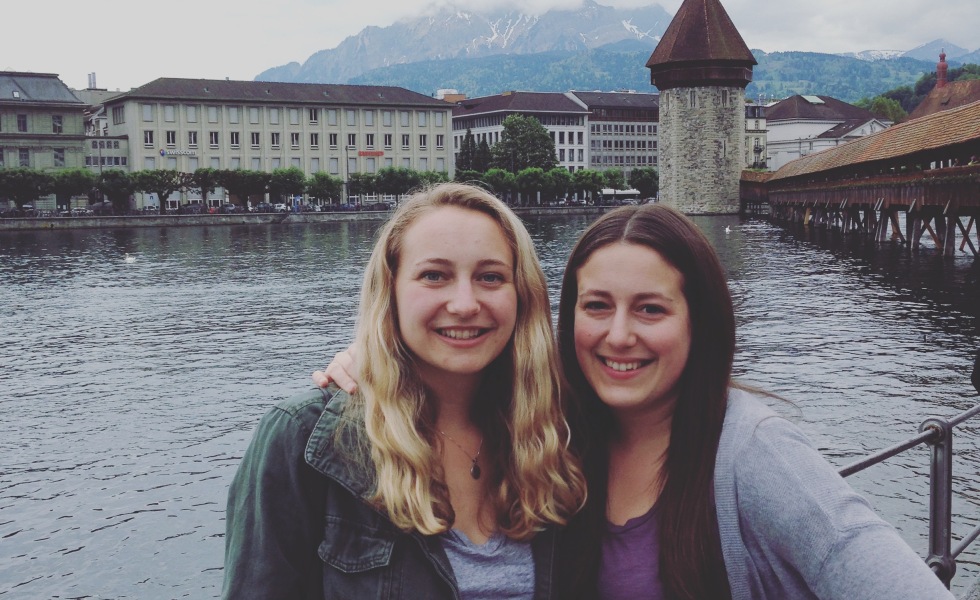 On May 19th, my sister and I took a flight to Zurich, Switzerland. We spontaneously booked a cheap flight from Skyscanner (only on our flight home did we find out why it was so cheap, but I will get to that later), and decided to plan a trip around the flight.

Our connection was in London. On the first flight we met a woman who was traveling there to meet up with her fiance who lives there. They apparently met on Twitter (this guy actually slid into her DMs) and then went to visit each other only 3 times. Now they are getting married. I love all the stories of the people next to you on the airplane.

Since we would have to fly out of Zurich, we decided to save it for last and go straight to Lucerne from the airport. It is about 2 hours south of Zurich right in the center of the country. The first night we were super jet lagged and decided on a quick walk around the city and dinner. We soon learned how expensive it was just to eat dinner in Switzerland. Tap water alone cost about $5 for a small glass, so you can imagine how much a full meal would be. The food was amazing though!

The next day we started with a walking tour of the city. I am the nerd who brings a notepad and paper to take notes while on the tour, but I will not apologize for being interested in history. Also, I will not tell you everything from the walking tour, but just some things I found to be very cool.

Switzerland has four language regions; French, German, Italian and Romansh (a mixture of different languages based on Latin). Lucerne is in the German speaking portion. These languages are affected by the countries that border them. Lucky for us, we both speak no German.

Lucerne became an important trade route to Italy, since it had the only stream going north and south in the area. They became rich by imposing a tax on anyone using their trade route. By the 19th century, other modes of transportation led to new trade routes and the city then relied on tourism as their main source of revenue.

Like most European cities, Lucerne was under a myriad of owners, usually from fights of religion and power. In the 12th century it was under French rule. Then it was under the Holy Roman Empire and in the 14th century was under the Hapsburg family. After Napoleon, Lucerne was the capital. In the 19th century, they had their last civil war between the liberal Protestants and the conservative Catholics. The protestants won the war and the Catholic Lucerne refused to be the capital. Lucerne decided in trade for the museum of the country, they would allow Bern to be the new capital. Obviously there are way more details about Lucerne’s history, but you can look it up if you want.

The most famous bridge in Lucerne is the Chapel Bridge, which was built in the 14th century. The bridge is crooked (not straight across the water) because it linked the religious centers of the time (hence the name chapel bridge). In the 16th century, Catholic reformers painted panels on the bridge detailing Lucerne’s Catholic history. At the time, most people could not read (only the higher class), so the images stood as a way to remind the people of religion and its importance. The bridge burned down in 1993 (there seems to be a theme with this place and famous things burning down), but luckily they were able to preserve all the panels and replace most of the bridge.

There is another bridge called the Spreuer Bridge, which has panels decorated with death themes. They had skeletons, grim reapers and blood. The images were supposed to remind the people that everyone is equal beyond. For me, it was just kinda creepy and morbid. To each his own I guess.

There were a ton of bridges, but the only other one I will talk about is the Chaff bridge. Everyone in medieval times lived inside the fortification except the bakers because of fire danger (seems they were better prepared for fire dangers back in the day). The name stands for the chaff, or waste from making wheat, that was poured into the river downstream over the bridge.

After the walking tour we went up to Mount Pilatus. We took the worlds steepest cogwheel train to reach the top of the summit at 7000 feet. Then we took the aerial cablecar down the mountain. Both ways provide beautiful views of the Swiss Alps.

After another expensive, yet delicious meal, we went to bed early for the coming day of travel. More stories about our trip to come. Until then please enjoy this helpful map of all the public restrooms in Lucerne…