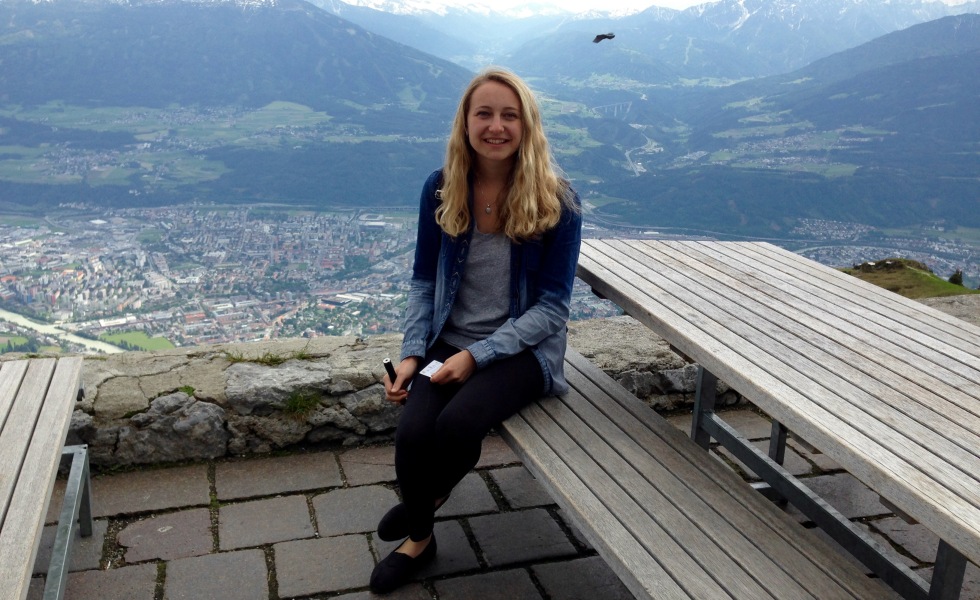 From Feldkirch, Austria we took the train to Innsbruck, Austria for the next two days. We were staying in an Air Bnb. Our host was at work during our check-in and therefore could not hand us the keys to his apartment. Logically, he sent us a video through iMessage showing us where he was hiding the key so that we could then enter the apartment ourselves. Of course the key is on a window still that is too high up for us to reach. After awkward hops and glares from strangers, we obtained the keys and got into the apartment.

Fun fact: The apartment had no toilet paper and by the time we arrived all the pharmacies were closed.

Since we arrived on the later side, we decided on dinner and a quick walk around the main city center. At dinner we found out that the family next to us were from the US. Their youngest son was attending Alabama in the fall and their oldest was at UAB. ROLL TIDE ROLL! It is true that Bama fans are everywhere!

The next day was jam packed with all the tourist sites. First on our list was Hofkirche. It is a gothic church built in 1553 by Emperor Ferdinand I as a memorial to his grandfather Emperor Maximilian I. The construction of the memorial took over 80 years to complete. The cenotaph is surrounded by 28 statues of Maximilian’s relatives, friends and heroes. The whole things was a bit extra for me, but the guy was obsessed with being remembered after death.

The museum offered an immersive experience about Maximilian. Let me remind you that we speak no German and that there were no signs in English. First you enter a dark room with all these pictures of famous figures on the wall. Lights would shine on the photos and explain the history. It felt like the beginning of some Disney ride, but I was scared it might be another Edinburgh Dungeon tour experience. Out of nowhere a door on the other side of the room slams open to a giant planetarium and I scream. I start running for the door but a museum worker yelled at me in German and locked me inside. I am sure there was some kind of language barrier, but I was completely terrified. Finally I was able to open the door and sneak out of the exhibit.

After a small panic attack, we went on to tour the Imperial Palace. It was built by the Empress Maria Theresa, who wanted something more modern for the family. Maria Theresa was the only woman to ever head the Hapsburg dynasty. The main hall, known as Giant’s Hall, is filled with pictures of all her children and grandchildren. She referred to it as the family room.

The Habsburgs ruled Europe for almost 800 years and were highly influential in Innsbruck. Emperor Maximilian I made Innsbruck the centre of his empire in the 1500s. In 1500 he built The Goldenes Dachl, or the Golden Roof. The famous balcony has a golden roof decorated with 2,738 fire-grilled copper tiles in honor or his marriage to Bianca Maria Sforza. Maximilian and his wife would use the balcony to observe festivals, tournaments and other events in the main town square.

Next, we ventured to the top of Nordkette, which is a popular ski slope. Since it is not the ski season, tourists can venture to the top for hikes and beautiful views. The journey consists of a tram ride and multiple aerial lifts. The top peak had very strong winds and immediately the altitude made it hard to breathe. It was worth it for these amazing views!

That night we ordered a Sachertorte with dinner. It was invented by Austrain Franz Sacher in 1832 for Prince Wenzel Von Metternich in Vienna, Austria. The original recipe is kept secret by the Hotel Sacher. Of course we had to have the original! It is composed of a chocolate cake with apricot jam. It is quite delicious.

After a long day of sight seeing and tours, we headed to bed. We had to be up early for our journey to Salzburg. More to come on that, but until then please enjoy this photo of some inspiration quotes over beautiful alps…