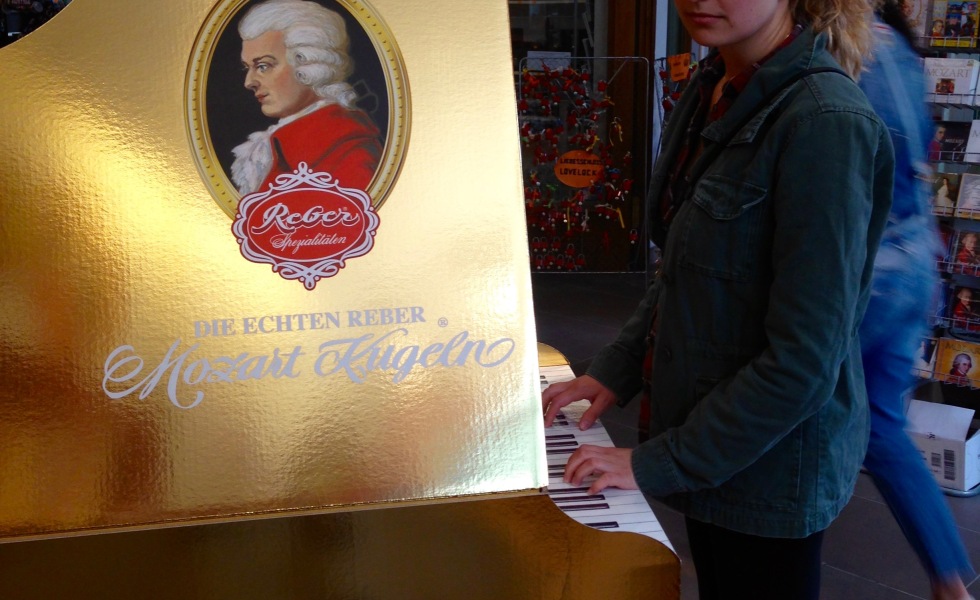 After our time in Innsbruck, we took a train to Salzburg. Our first stop was the Hellbrunn Palace, built in 1613 by Markus Sittikus von Hohenems, Prine-Archbishop of Salzburg. Hellbrunn was used as a day residence in summer and is named for the clear spring that supplied it.

The palace is famous for its trick fountains. Markus Sittikus created these fountains to use as practical jokes on guests. (He basically liked shooting water at his friends. He might be my hero) Some of the trick fountains would be under seats or some coming out of the steps. All the fountains run on water and gravity alone, no electricity. There was even a small 1750 mechanical town that played Mozart music. The entire thing was run by a water organ.

Imagine sitting on this! 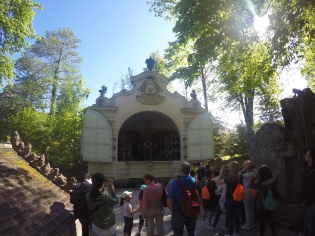 On these grounds is the gazebo from The Sound of Music. There is a whole Sound of Music tour that you can do, but of course it is ridiculously priced and would take up our entire day of sightseeing.

Next we went to Hohensalzburg castle, one of the largest medieval castles in Europe. Inside the castle there was a giant timeline of events surrounding the construction of the castle to modern day. (You can look up all the details if you want) OF course, the theme of fire came up again and again. It seems as if these towns just keep burning down and building the same things.

After we went on a tour of the Stiegl brewery. The name comes from a set of steps (stiegl means steps) that led down to the waters of the canal in Salzburg.  The tour included a generous beer tasting.

The next day we signed up for a tour of the salt mines. There are salt mine tours all over Austria. Honestly it was hard to hear during the tour, so I did not learn very much other than it how long it must have took to construct these mines by hand. The tour itself was strange and crazy. First you must put on these ghostbuster looking body suits. Then the guides squeeze you onto these trains that whip through small mine tunnels. Suddenly there is a laser light show and then you go down a toboggan slide. It was one of the strangest tours of my life.

On a side note, I tend to hate these guided tour things. We were with a group of other couples, families and people that did the tour with us. A lot of the older couples kept asking us where our parents were or just assuming that we had no idea what was going on because we looked young. Granted, I look 14, but the assumptions started to become annoying. So to people on tours…please stop talking down to younger people traveling.

Also there was a woman on our tour with her husband and three young children. This woman did not understand sarcasm and instead took every comment I made as a way to  “mommy” me. As we were returning from the tour to return the ghostbusters uniforms, I made a comment to my sister about how I was going to steal the uniform and run off. This woman (who was not even in our conversation) turns around and tells me that I have to return the uniform and that the guide said so. I then went on to tell her I was telling a joke to my sister. She went on to not understand and then very slowly explain how we return the uniform. She always talked to me like I did not understand everything. It was like the woman at the post office that assumed I had no idea how to address a letter. Maybe its a young thing or blonde thing, I don’t know. Anyways it can be very frustrating when you are traveling.

Anyways back to the trip…

After the salt mine tour, we visited the Mirabell Palace. It has a famous marble hall that is used for concerts and weddings. Many people recognize the gardens from “Do, Re, Mi” in the Sound of Music.

When the sun was setting, we took a boat cruise tour. It was just a ride down the Salzach River. The old city, or Altstadt, is on the left bank, while the new city, or Neustadt, is on the right. The boat tour would have been interesting if I could actually hear anything over the sounds of screaming children and people talking. Fun fact: Apparently Mel Gibson and Tom Hanks once stayed at a fancy hotel in Salzburg (that is all I could catch from the guide).

The most important fact about Salzburg is that it is the birthplace of Mozart and home to a museum of his childhood instruments. The town is obsessed with Mozart. Even at the end of the boat tour, the boat spun in circles while “Rock Me Amadeus” blared on repeat. Salzburg is home to the Mozart ball, or Mozartkugel. It is a small round chocolate made of pistachio marzipan, nougat and dark chocolate. It was created in 1890 by Paul Fürst and named after Mozart. The handmade original ones are manufactured by Fürst’s descendants up to today. Of course many versions of the Mozart balls can be found all over Austria.

The next day we had to travel back to Zurich, since out flight back to New York left from there. We decided to leave Salzburg early so we would at least have a couple hours to explore Zurich.

We visited the Grossmünster, a Romanesque-style Protestant church (personally, I liked the name). Majority of the stained glass windows in the church are created by Sigmar Polke. I could not take pictures, but look it up because they are beautiful! Since it was Sunday, every other tourist site was closed. We at least got to walk around and see the outside of all the beautiful buildings in town.

For our last night we decided on fondue and raclette. Both of these dinners are focused on melted cheese so it was right up our alley. It was a great end to an amazing trip.

To get to why our flight to Europe was so cheap…

Our flight back home landed in JFK airport, but our next flight back to Philadelphia left out of Stewart International Airport, about an hour taxi ride away. Instead of taking the flight, it made more sense just to get a train back to Philly after leaving JFK.

We made it home safe and sound. More to come on my move to LA!

Until next time please enjoy this photo of me getting tricked by the trick fountains in all the right places!

← The Golden Roof
The Waiting Place: A Year At Home →