I Did Not See Russia From My Window

As you may be able to tell from my photos, I just got back from a vacation in Alaska. I traveled there with a friend from study abroad to stay with another friend from study abroad and have a mini reunion in the final frontier. To answer some quick questions, I know you are all dying to know…I did not see Russia from my backyard and I did not get eaten by a bear, nor did I see one (a little bummed about both these facts). Although it was beautiful in Alaska, my reasoning for going on the trip was to see old friends. If you have an opportunity to re-connect with friends, I highly suggest it. People are the most important thing in your life.

Alaska is the 3rd least populous and the most sparsely populated of the 50 states, but ironically it is the most populous territory located north of the 60th parallel. The estimated population is 738,432 (not even a million), with half of Alaska’s residents residing in Anchorage. I know you may not care, but I had a lot of time to read Wikipedia during my layover and thought it was interesting.

I arrived at Anchorage airport around 11:40pm and it was still daylight outside. It did not hit me right away how far north we were, practically close to the arctic circle. Science tells me that we did experience some darkness (since we were below arctic circle), but it felt like one continuous day.

Our first day we headed 2 hours south to Seward, Alaska.  The drive itself was gorgeous and seemed like it was almost fake. The bright blue water mixed with the snow topped mountains was breath taking. It was only 15 minutes outside of Anchorage where the mountains started to overtake the view.

Some history on Seward first (and the Alaska Purchase). The Alaska Purchase was the United States’ acquisition of Alaska from Russia in 1867. Russia wanted to sell the land due to its difficult living conditions and lack of natural resources (the irony must have killed them later). Also, they did not want the United Kingdom to easily seize the territory in case of war. The town name of Seward comes from its actual purchaser, Secretary of State, William H Seward. Americans opposed the purchase and dubbed it “Seward’s Folly.” I guess those natural resources really showed them.

For the next two days we camped right by the sea in Seward. Every July 4th the town has a race up and down Mount Marathon, about 906 meters high. Also, the town in mile 0 of the historic Iditarod Trail. The trail began as a passage across several mountain ranges and valleys en route to Nome for Alaskan native peoples. When the gold rush hit in 1910, thousands of people began traveling the trail, populating along it. Today, it is the route for the Iditarod Trail Sled Dog Race every year.

On our first day we went on a tour of the Iditarod Sled Dog facility. This is where they train the sled dogs until they race. The dogs will also train with their team, but remember we are in Alaska in the summer, so it is easier to train by pulling tourists. The trail, as mentioned earlier, goes all the way to Nome during the winter. It is a brutal course, that typically takes easily over 8 days, where you get no sleep and must travel alone while taking care of your 12-14 dogs.  The girl giving us the tour came in 49th place this year, but keep in mind that not everyone finishes the race. Finishing is a feat. She was a total badass.

The tour started with a puppy cuddle session. I could have died happy in those moments. A lot of people assume these dogs are huskies, but they are all mutts. Most dogs were pulled by people in the gold rush and taken off the streets. Now the dogs are bred based on their racing qualities.  After we were taught about the sled dogs attire and equipment (you can see a picture of Custard below with full get up). Then we were taken on a sled ride. The dogs love racing. They bark and howl if they must stop at any moment. All they want to do is run.

The dogs are attached at their side to another dog. When they stopped to take a pee break, they first went to the right side and all the right-side dogs peed. Then in sync they shifted to the left side, so the other half could pee. It was quite hilarious. Also, female dogs do not race because the male dogs were getting too distracted especially in heat. Another fun fact is that the term “mush” or “mushers” comes from the French verb, marcher, or to walk. We are simply mispronouncing the term and now because of movies/TV/culture, think it is the word to say to sled dogs. 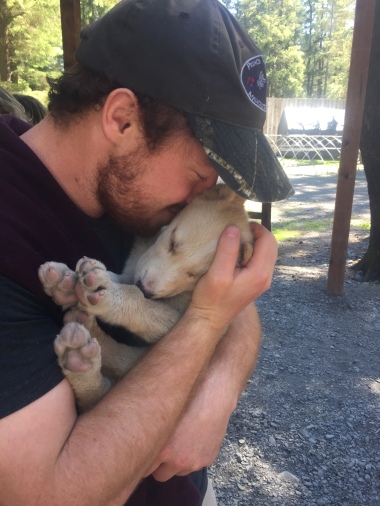 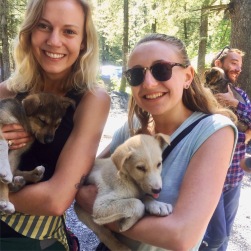 Later that day we hiked up Exit Glacier. It is an active glacier located right outside Seward. We did not see any bears on the hike, but always remember to carry bear spray. It is like pepper spray on steroids. During the hike there are signs showing where the glacier used to be based on the year. For those who think climate change is not real…the below picture is taken at the sign that reads “Year 2010.” In just 8 years the glacier has shrunk significantly, and it is not getting any better. I am happy that I got to see this because who knows how long we will be able to hike and see it. Before I get myself on a rant and depressed, I’ll continue along with our trip.

The next day we took a 3.5-hour wildlife cruise through Resurrection Bay in Seward. The name has something to do with retreating during a bad storm. You can look it up if interested, I cannot recall. We got to see everything from a humpback whale, sea lions, sea otters, puffins and bald eagles (4th of July, freedom, America, etc…) Also, they gave us bloody mary’s on the cruise, so it was just perfect.

After Seward, we headed back to Anchorage for the rest of the trip. We started by going to the art museum. There was an underlying theme of current culture overtaking the native lands. This theme can be stretched throughout the entire US, but especially in areas such as Alaska, where there is still “untouched” land. One may view this lands as a place that is not be utilized, an economic opportunity, while one may see it for the beauty it holds and believe we must keep that land safe (think of it as Pocahontas I guess). Anyways, it was very interested to see.

Then we went to the bars of Anchorage. The downtown area was great and bigger than I had expected. I also did no research before coming to Alaska, so that is on me. We went to two speakeasy’s in town. The first one we had to leave (there was no rule about playing “Bad and Boujee” and not knowing it was heard by the actual fancy restaurant out front…opps).

For our last day we went to Crow Creek Mill. The town was established in 1896 and is still one of Alaska’s most renowned hydraulic gold mining operations. Walking through the town feels as if you are back in time, working in the mill yourself. Then we treated ourselves to dinner and drinks at the famous Double Musky Inn, located in Girdwood, Alaska. It is a cajun style restaurant built in 1962 and was originally an after ski bar stop.

Thank you Charlie for being a wonderful host (also to your roommate Nolan for letting us take over your place). Lizzy, thank you for agreeing to come with me. Being able to see you both again was a dream come true.

Until next time, please enjoy this tree with a donk (that is slang for big butt)

← The fight is never about grapes or lettuce. It is always about tacos.
Lost in Translation and Toilets →

3 Comments on “I Did Not See Russia From My Window”